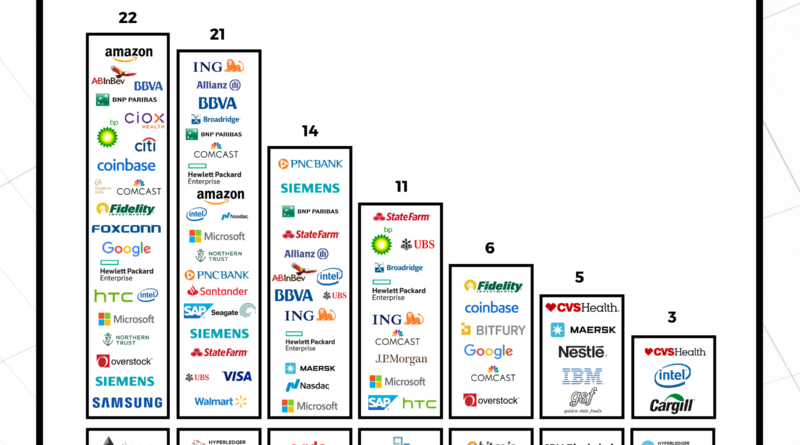 News
By admin / May 5, 2019 0 Comments
BLOCKDATA
Last week, Forbes published its Blockchain 50 list, made up of the world’s* biggest companies that are actively working with blockchain technology. Included in the list are a handful of blockchain startups themselves, each with minimum valuations and/or sales of over $1 billion. We decided to take a deep dive into the companies on this list to see if we could spot any interesting trends. We found that:

*to be included, companies must have at least some US-based operations 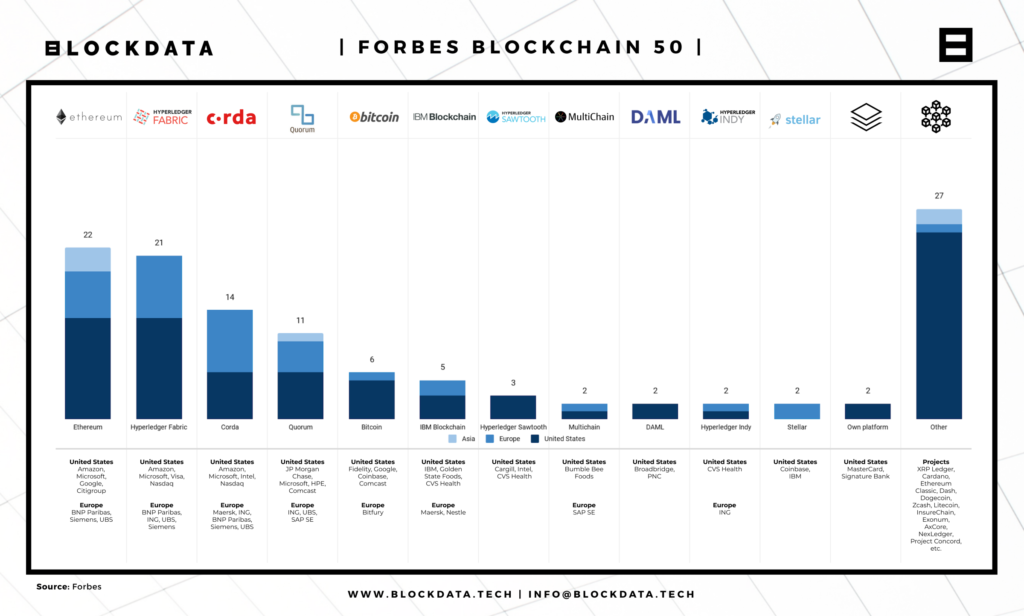 We were interested to see what the most popular development platforms are for these unicorns. Ethereum is being used for developing blockchain applications by 22 companies on the Forbes 50. This shouldn’t be too much of a surprise as Ethereum was designed to accommodate decentralized applications and smart contracts. Following closely behind are the 21 companies building on the Linux Foundation’s Hyperledger Fabric. The appeal of this system is that it is still open source, but is designed to be natively permissioned. Large corporations find the appeal of a permissioned blockchain like Hyperledger to be quite compelling, though Ethereum also supports similar configurations despite its more utopian origins.

Corda is the next most popular platform with 14 companies. Corda is enterprise distributed ledger technology (DLT) from the R3 consortium, which is made up of 200 of the world’s biggest banks and multinationals. JP Morgan’s Quorum, which powers its Interbank Information Network of 75 worldwide banking partners, is being actively developed on by 11 of the Forbes Blockchain 50. Like Ethereum, Hyperledger, and Corda, Quorum is open source and is being contributed to by developers all over the world. IBM, one of Hyperledger’s primary supporters, has five of the Forbes Blockchain 50 developing on its own platform.

The most interesting trend across these 50 companies is that nearly all of them are building on more than one blockchain platform. While these firms may end up committing to developing on a singular technology (such as Ant Financial or Oracle), it is clear that for now, they are hedging by working with multiple platforms. In the diagram below, you will see these company logos appear in multiple columns. 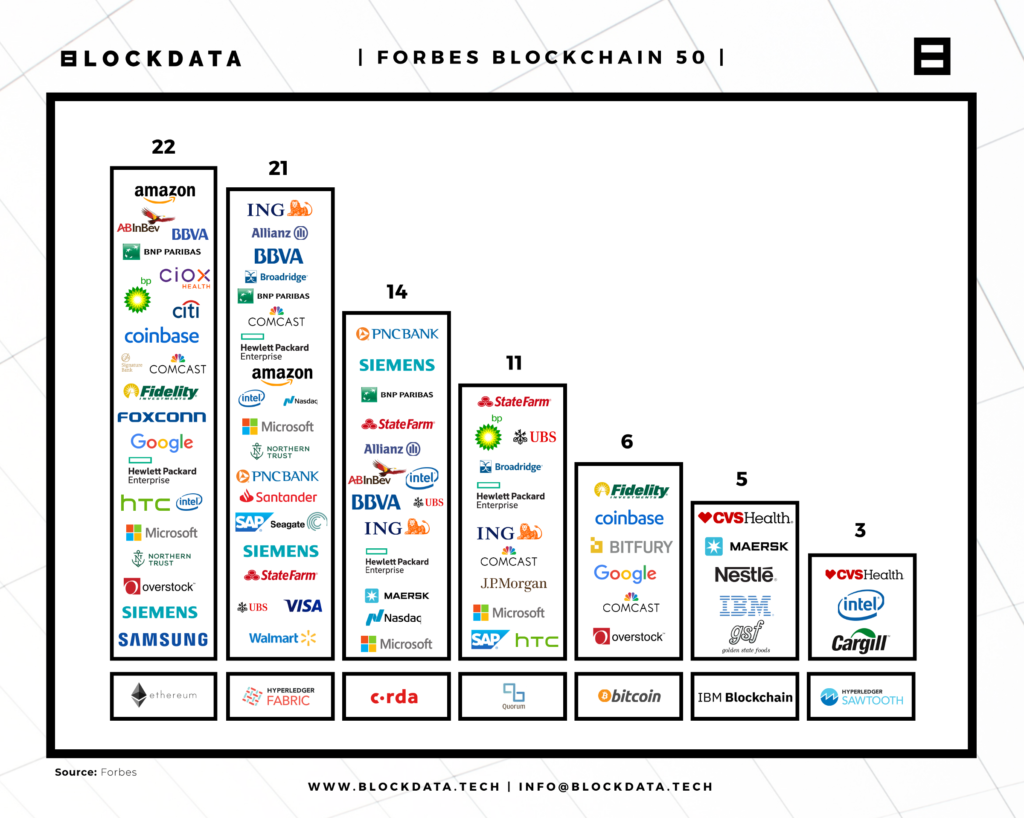 As well as the blockchain efforts of the companies on the Forbes 50, there are promising global trends for DLT development and usage. According to the International Data Corporation, worldwide spending on blockchain development is forecasted to grow by 88% from $1.5 billion in 2018 to $2.9 billion by the end of this year. Total spending is expected to further rise by 76% each year to reach $14.4 billion by 2022. 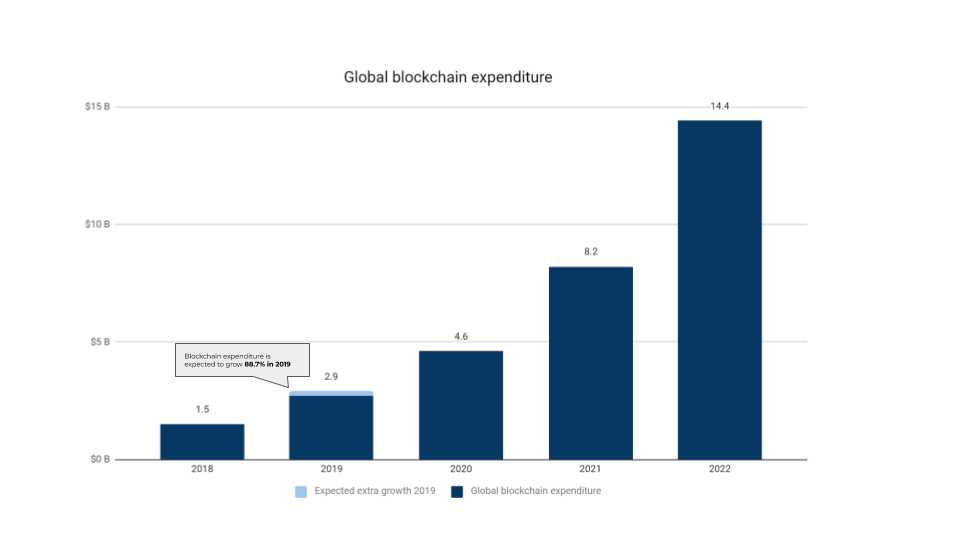 This investment will be led by the financial services sector. The most popular use case in 2019 is cross-border payments and settlements with over $450 million in investment pouring in. And as we wrote about in our report on remittances, technology designed to address existing inefficiencies can be used for intra- and inter-bank payments as well as for individuals to instantly send money abroad at significantly cheaper rates. The use of blockchain technology will help the remittance market to grow to over $1 trillion in the next three years. 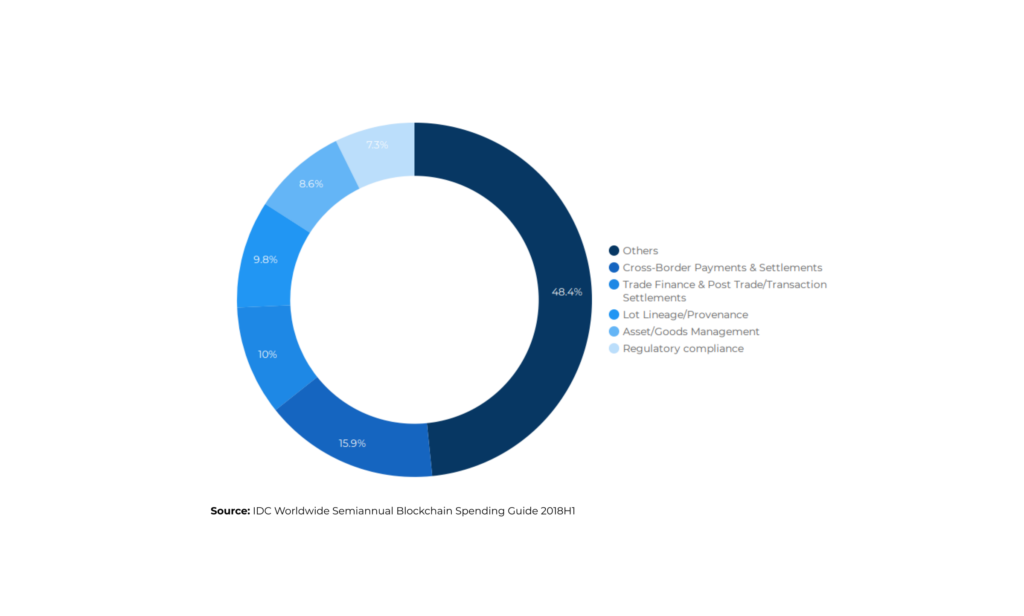 The area with the next most investment is trade finance and post-trade/transaction settlements. It should not come as a surprise that a $16 trillion industry where most processes are still done on paper is ripe for disruption. As we wrote recently, a number of consortia are working to use DLT and blockchain to reduce the inefficiencies of legacy systems.

The area with the fastest growth in blockchain investment is the manufacturing and resources sector at 77.6% CAGR (compound annual growth rate). The primary interests here are in asset management, provenance (i.e. where something comes from), and identity management.

Monday had some potentially huge news for crypto adoption. Payments startup Moon announced that customers can now pay for purchases on Amazon using bitcoin Lightning Network payments. Using a Chrome extension, customers can use bitcoins from an exchange wallet like Coinbase to make payments. To be clear, the merchants themselves will receive the fiat currency they are accustomed to. But it’s not hard to imagine that if Amazon sees sufficient customer interest in using payment platforms like Moon, direct crypto payments may not be far away.

Blockdata offers a new way to understand the digital economy, starting with blockchain. We publish objective information about the companies, projects, products, and tokens that comprise the blockchain ecosystem. It was founded in 2018 by three friends frustrated by the cumbersome process of conducting blockchain research.

For more information, please contact hello@blockdata.tech or request a demo.